How a motion control system transformed an Edge Server

The technology that allows multiple virtual machines to be operated on a single hardware platform without affecting the real-time core of the controllers is the basis of new edge server systems. This article originally appeared in the Automation 2021: Control Systems eBook.

Most of us have come across at least once in our life a product that has been processed using a ProCom cut control system. It controls the cutting of the majority of foams produced in the world, which are used in mattresses and furniture or in airplane and car seats. It is also responsible for many fabric cutting applications, whether it is a high quality branded suit, discount jeans or a mass produced t-shirt. This position has been held by the supplier of software and CNC controls since 1983 specializing in cutting processes. The company started out with contour cutting out of foam. The clothing market with textile cutting followed. With additional control solutions and software for plasma jet, water jet and laser beam cutting, the company has become an expert in industrial cutting.

The company offers different cutting technologies with the CNC300 based on industrial PC. ProCom’s customers are mainly machine builders. Intelligent algorithms that have been developed over decades ensure an efficient cutting process and provide optimal nesting of parts on the cutting machine. This ensures maximum material utilization and high precision cutting results. This is a particularly complex challenge, especially when it comes to cutting out 3D foam contours.

When cutting foam contours, a wide variety of contours are cut from a large block of foam with a rotating band knife, without turning the knife off and on again between individual cutting jobs or without removing it from the block. All the parts to be manufactured are cut in a single working step. Regarding the paths between the parts, it should also be considered that the parts that have already been cut no longer come into contact with the band knife and are damaged as a result. The software that users can use to optimize these cutting processes runs on the machine’s control hardware and can also be configured there as needed. In some cases, it is also executed on a CAM workstation for job preparation and then transferred to the control system, including detailed production planning for the relevant day.

Focus on plasma, water and laser beam cutters ProCom provides motion control including Graphical User Interface (GUI) for machine operation with tool selection and all other functions related to the machine. machine. It is precisely this concept that has convinced machine builders in the foam and textile industries around the world. ProCom also offers this approach to machine builders in the plasma, water and laser cutting segments. The industrial end user is offered a software adapted to the machine and allowing him to obtain the best possible productivity. The efficient operation combined with a high level of flexibility through a wide range of functions with adjustable parameters is particularly impressive.

The company has recently developed a new platform of laser cutting solutions, especially for the Asian and Chinese market. Studies show that approximately 50% of the expected growth in APAC will be achieved in laser cutting. Lower production costs make laser cutting the technology of the future in many areas. A significant market for ProCom is the steel market. Many sheet metal cutting machines from Europe are a successful example. Whether decorative objects or industrial sheets, with the complete package from ProCom, the best possible material efficiency is achieved in all applications. The complete set fits perfectly.

How the motion control system became an edge server

Since a complete package consists of more than just a CNC controller, ProCom’s control solutions today are based on hypervisor technology to distribute individual tasks among dedicated virtual machines. (Figure 1). However, this was not the case in the past. In previous projects, the company implemented a control system with a dedicated CNC and PLC core and an industrial PC-based hardware and software platform as a human-machine interface (HMI). At the time, a three-processor hardware solution served as the platform and architecture. The HMI was first based on DOS, then OS / 2 for a while, before switching to Windows and the different generations of Windows.

Today it is based on Windows 10 IoT Enterprise. Then and today, the On Time RTOS-32 real-time operating system coordinates the cutting motion of servo axes, built-in Programmable Logic Controller (PLC) functionality, and all the safety monitoring functions required for CNC machine control. Communication between the two discrete processors was based on the Multiprocessor Message Exchange (MMX) protocol.

For many years, ProCom controllers were not based on fieldbuses. Instead, the servo axes were connected through the common ± 10 volt setpoint interface, which also handled the evaluation of encoder signals, including zero pulse processing, which ProCom controls enabled as standard. With the advent of fieldbuses, the company took advantage of the Sercos I and later Sercos II digital fiber-optic interfaces in the mid-1990s. In 2011, a new development milestone was taken with the design of communications based. over Ethernet. ProCom chose EtherCAT for the protocol capable of operating in real time, after purchasing the main stack. It was during this phase of development that the company decided to move from a multiprocessor system with a dedicated card for the real-time processor, to a multicore x86 solution with one to two cores dedicated to the Windows world plus one core each. for the PLC and CNC motion control functions. To implement this step, the hardware multiprocessor solution, then used for nearly 30 years, had to be virtualized on a multi-core processor.

At this point, ProCom was faced with the essential question: “Make or buy? A virtualization solution was needed that separates the Windows world for GUI and work preparation functions from real-time functions without affecting them. As part of the research, the company stumbled upon Real-Time Systems, analyzed and tested the product extensively, and ultimately decided not to get involved in the development of a hypervisor itself. The real-time hypervisor was perfectly developed, covered all the required functions and had already sufficiently proven itself in the market. Since then it has been used on ProCom controls. The real-time hypervisor also handles much more complex tasks that have been added due to the demands of Industry 4.0 and digitization.

The complexity of tasks continues to increase

Today, the ProCom system, whose performance is scalable via Intel Core processors, has an OPC-UA interface for communication with higher-level control systems that control larger system networks, or for transferring data. Operational and machine data to the Manufacturing Execution System (MES) and Enterprise Resource Planning (ERP) connections. In addition, the company also offers its own.

Industry 4.0 platform called Clouver, which offers numerous dashboards and tools for monitoring, managing and maintaining machines and for which each ProCom controller on the market already has a suitable interface. For Clouver to receive all relevant data, it is necessary to be able to access the platform in real time. (Figure 2). This is another point where the hypervisor plays an essential role because the data must be collected in the real-time machine during the cutting process and then made available to other stakeholders via the Windows world without interfering with the real-time processes. The need to handle all these tasks has transformed the controller into a multifunctional system that resembles an on-board computer as it is fully networked horizontally and vertically in all directions. As porting to a fog server capable of running in real time would also be easy, the hardware may undergo further consolidation in the future.

The Right Virtualization Decision ProCom is extremely pleased with its decision to purchase the real-time hypervisor from RTS. Tasks haven’t gotten any easier over the past decade, and the motto of sticking to basic skills has clearly worked for them. “We feel in good hands with real-time systems,” said Harald Müller, Head of Consulting and Production at ProCom. (Figure 3). “Our collaboration is always constructive. RTS are true experts with deep craftsmanship and great products. The support works, the solution works and our team which integrates the purchased modules into our software solution has not encountered any problems. And everything about regular services and updates is well organized.

As a software solution typically as simple or even easier to install than an operating system, the RTS Real-Time Hypervisor is a convenient tool for developers to consolidate many individual edge-dedicated solutions into a single system. multi-core processor without compromising actual performance. time capacity. Emerging embedded server technologies from AMD and Intel, which offer many more cores than today’s high-end embedded processors, will also open up a huge development field for hardware consolidation. (Figure 3). It is therefore good to know that hypervisor solutions, which have been proven in the field for many years, are already available and efficient.

This article originally appeared in the Automation 2021: Control Systems eBook. 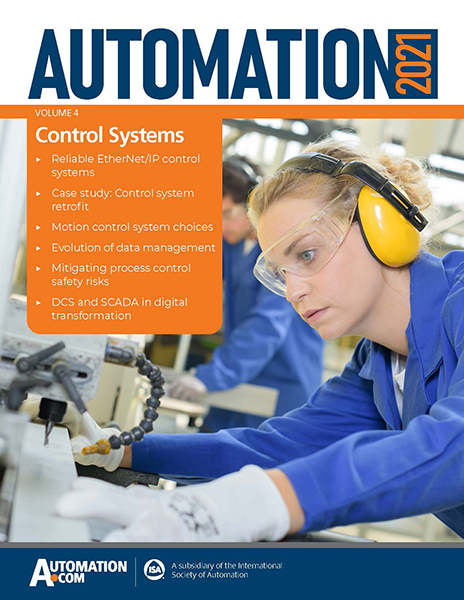 Michael Reichlin is Head of Sales at Real time systems, a German company headquartered in the United States in San Diego. The company specializes in consolidating deterministic real-time operating systems (RTOS) with other less critical applications on a single hardware platform.

Did you enjoy this great article?

Check out our free e-newsletters for more interesting articles.

The dirty secret of clothes is released